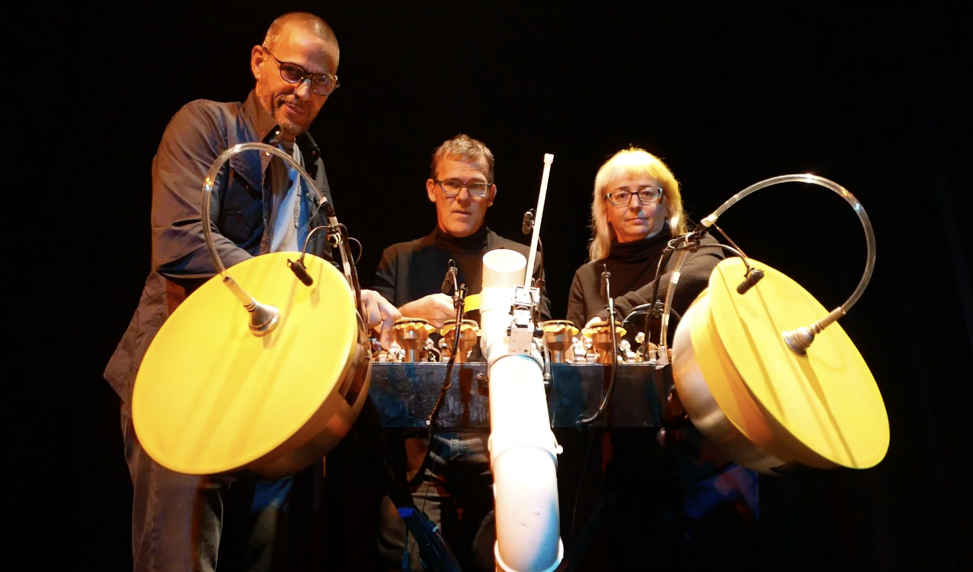 ma bel, my new piece for Jean-Francois Laporte’s compressed-air instrument, the babel table, was premiered in Canada at the Conservatoire de Musique de Montréal on October 4th 2019. The featured image above is of Jean-Francois (left) along with Quasar Quartet comrades Jean-Marc Bouchard and Marie-Chantel Leclair. What they’re staring at is a laptop. Using MaxMSP, this plays a video of the score in sync with the live triggering of lots of samples. The babel table is Jean-Francois’ “all in one” instrument that combines the following:

video of the premiere

Gray Codes are used to determine the ordering of the instruments. In each of the six sections of the piece, there are four instrument groupings. Sometimes only one of the four instruments is used, other times one or more instruments continue to sound while the main instrument is switched. The use of Gray Codes allows a fluent movement between the instruments, as such binary code sequences are designed to produce numbers which change in only one binary digit rather than to increment whole numbers. In the case of this piece, each digit represents an instrument. So in the following list, generated by calling a Common Lisp function to generate gray codes with four bits, we proceed through the decimal numbers 0, 1, 3, 2, 6 rather than 0, 1, 2, 3, 4 etc., as the change in binary digits from decimal 1 to 2 would imply moving from “0001” to “0010” (which of course would mean two actions: turning one bit on and another off):

The instrument ordering/progression is as follows, where the main instrument comes first and instruments continuing to sound follow, if at all, in parentheses:

By the way, I’m certainly not the first to use Gray Codes for artistic purposes. Samuel Beckett is known to have been interested in their use for determining the entry and exit of actors on the stage of his theatre works.

The very simply notated score for the babel table and sampler parts was generated in MusicXML with my slippery chicken software, then edited in Steinberg’s notation software Dorico. To generate the video (without audio of course) I simply made a screen recording of Dorico’s playback facilities. It would be preferable, if it were possible, to leave the play head (the vertical green line) in the middle of the window and have the music scroll constantly to update the current position. That way you could always see what was and what will be, rather than have sudden jumps. But this isn’t possible in Dorico (yet?):

As the pitches in the computer parts are mapped to sampler banks there is not usually a relationship between the perceived and notated pitches. Similarly, pitches in the babel table part are relative, with middle D being the lowest and B5 the highest pitch notated. Thus neither part represents exactly what should sound in the pitch domain, rather each is an action line.

Audio channel output routing is handled by the ICST ambisonics objects for MaxMSP. Third-order ambisonics output internal to this patch can be configured to physical outputs ranging from 2-16 channels using paths that involve movement around the audience as well as, optionally, up and down. I was especially happy to have taken this route in designing the diffusion as just a couple of days before the premiere I was informed that the performance space had not only an octophonic speaker system on the audience level but also another one above the listeners. Reconfiguring the ambisonics sound paths for this unexpected feature was thus much more straightforward than moving from a fixed eight-channel system to a fixed sixteen.

ma bel was written for Jean-Francois Laporte and his composite compressed-air instrument, the babel table. This name works in both French and English, if the word order is reversed. And the connection to the Old Testament myth explaining the origin of the world’s different tongues is clear.

The title ma bel transposes merely one character of ba-bel but in doing so offers several meanings to speakers of different languages: as a homonym in French (ma belle) it could refer to my beautiful (wife, daughter, belle-sœur, etc.) or imply the more complete ma belle vie; in English it could be misheard as marble (the stone but also the child’s toy) or refer to Mabel, the woman’s name; but in Arabic ma bel means what but, after which I particularly enjoy question marks and perhaps even a why?—good things to ask about a piece such as this.

So then: so few symbols, and even fewer syllables, but so much meaning and context. And babel connects back beautifully to this in that, obscured from its mythological context, it refers more generally to a confusing mélange (as in mixture, not the Viennese coffee :): a mêlée, in the non-violent sense, of sounds and voices or a noisy, confused scene in general. Such is ma bel: a plethora of unrelated samples mixed with the potent sounds of Jean-Francois’ instrument, all driven by a score which is digital yet conventionally notated.

What you see or read, however, is by no means what you get (I’m referring now particularly to the score). The symbols need even more translation, interpretation, and making sense of than usual. And that’s not just the musician’s job but the audiences’ too (as always), given the sound structures on offer.

And further: ma bel integrates strongly emotive vocal utterances from a certain Austrian female; samples that are prelingual but often guttural (synonyms perhaps here: before the tongue, as in before language as well as the muscle)—even guttural in both senses: articulated in the throat and perhaps unpleasant or strange—and most definitely communicative, in a nonsensical way, bien sûr.

This is what music is: by no means a language but nevertheless able to communicate or rather provoke a wide variety of experiences, and transporting meaning (or not) to individuals formed both collectively and uniquely. (Ahh… ma bel(le musique)!)