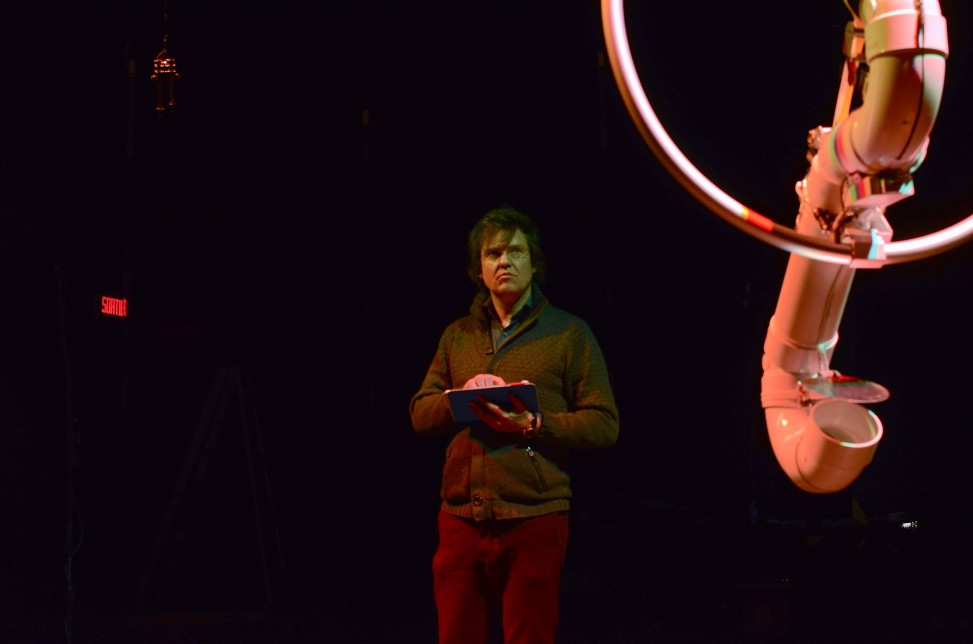 hyperboles 4 – the extremities of cold, Montreal

My hyperboles project saw a new iteration in Quebec last month. Performances of  hyperboles 4 (“insomniac rain”) took place in Canada, on February 25th courtesy of the festival Mois Multi 2015 – Spectacles in Quebec City, and on March 1st at the Montreal Nouvelles Musiques festival.

Humans exaggerate on a regular basis. Typical hyperboles might be “this bag weighs a ton”, “I’m so hungry I could eat a horse”, or any of the invariably (!) hilarious “Yo’ mama so fat…” jokes. Perhaps even worse than footballers (“I hit the post. I was gutted”) are artists. Have you ever sat silently suffering (“dying”, anyone?) at a contemporary poetry reading, as the reciter over-emotes their way through a litany of subtexts we can summarise by “me, me, me! I’m so deep and clever!”? Such occasions often merely reinforce the popular perception of artistic outputs as being expressive of the creator’s emotions. But that is less interesting than artworks’ invitation to be social, communal, and at the same time to introspect and inspect our personal, perhaps emotional reactions to intrinsically neutral objects.

This is the fourth version in a series of works for live instrument(s) and computer. The beautiful hyperbola relevant here comes from Gabriel Garcia Márquez’s Living to Tell the Tale, from 2003: “At that time Bogota was a remote, lugubrious city where an insomniac rain had been falling since the beginning of the 16th century.” As I write this, the rain is pouring in Edinburgh, in typical November fashion. I’m dreaming of the sun. I note that, although it has more sunshine, Montreal has 50% more precipitation than Edinburgh. Let’s keep our heads above the cats and dogs out there. It was really cold in Quebec: down to -31C on one day at least. We were working so hard I didn’t get to do much sight-seeing but I did take a walk one day in Quebec City. This photo, taken from Chateau Frontenac, gives you an idea of the kind of temperatures we were dealing with there. This version of hyperboles is for an orchestra of Jean-Francois Laporte’s compressed air instruments. These are robotically controlled hand-built instruments which use compressed air to generate sound. This might be as in a flute, by blowing air into a tube, or in the case of the ‘membranes’, the ‘telescopiques’, and the ‘pipes’, by combining this with a vibrating membrane, such as a simple air balloon.

The setup was enormously complex. Not only did all the instruments have to be transported and installed in the venues, but compressed air had to be delivered to each and every one of them from a remote location (because of the noise) via different gauge plastic tubes. Given that the flow of air and various other parameters of the instruments were controlled via an array of microprocessors, I was stunned at how robust the whole system was once up and running.

The whole system was controlled by an OSC (or MIDI) software messaging system devised by Benjamin Thigpen and implemented in MaxMSP. Again, I was impressed by the robustness of Ben’s system. Due to the sheer number of messages flying around—especially when controlling the air flow continuously, via envelopes of various kinds—it was necessary to divert the instrument control onto three standalone network-interfaced Mac Minis. Once our personal machines were connected to this system via a network hub, we were free to roam the space and control our performances via the iPAD or in Michal Seta’s case, a custom piece of hardware—the intonaspacio—in the shape of a sphere.

Most of the instruments’ sound was captured via microphones and delivered to our personal machines for processing, as is visible just above the yellow membrane on the pipe below:

I took advantage of the mic signals to do a lot of signal processing. Here’s a recording of my piece from the Montreal live performance:

It was a great pleasure to work on this project, not least because of the other composers and collaborators, notably Michal Seta, Zack Settel, Benjamin Thigpen, and of course, Jean-Francois Laporte.