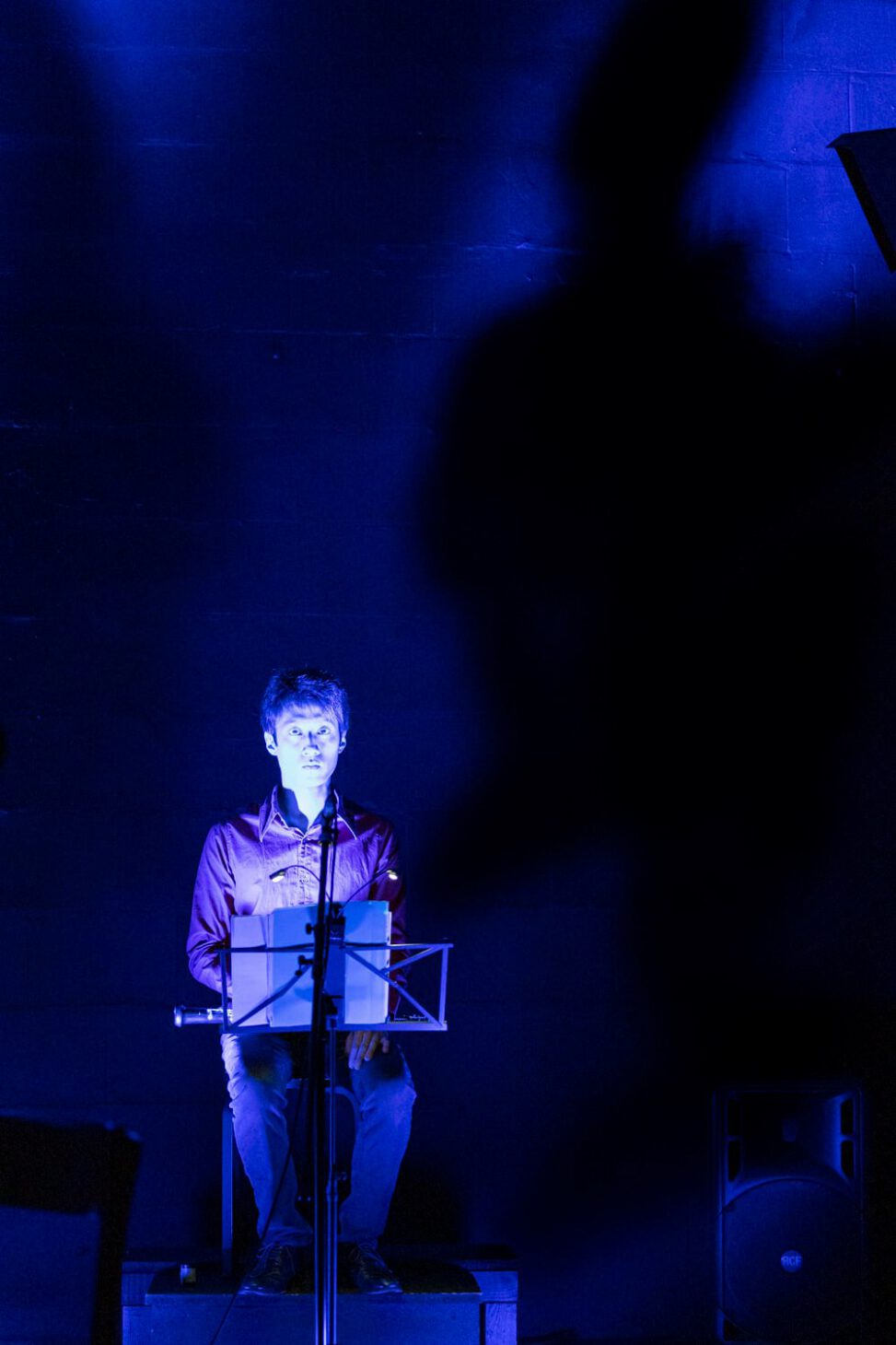 On June 11th 2021 at the RüBühne, Essen, Ensemble S201 gave the premiere of the sixth installment of my hyperboles series before repeating the concert on August 12th at the Europäische Kunstakademie Trier.

Like hyperboles 3, for saxophone quartet, this version departs from the initial conception of purely algorithmic music for solo instrumentalist and computer. Scored for for flute, oboe, bass clarinet, accordion, cello, and computer, it is still generated algorithmically but the oboe part consists of only three long, quiet, high notes placed directly by me, rather than the algorithm. In a significant way however, the oboist, here Tamon Yashima, is the soloist: he sits apart, on a raised platform, is the focus of the coloured light changes, and performs the face or other exaggerated gestures common to the versions for soloist and computer alone. On the other hand, by only playing three notes in the half-hour piece, he is very much an anti-soloist too. The flute player, as with the first piece in the series, takes the role of the original soloist while the clarinet, cello, and accordion take the original’s three main computer voices.

The recording below was made very last-minute using a hand-held stereo recorder.

Humans exaggerate on a regular basis. Typical hyperboles might be “this bag weighs a ton”, “I’m so hungry I could eat a horse”, or any of the invariably (!) hilarious “Yo’ mama so fat. . . ” jokes. Perhaps even worse than footballers (“I hit the post. I was gutted”) are artists. Have you ever sat silently suffering (“dying”, anyone?) at a contemporary poetry reading, as the reciter over-emotes their way through a litany of subtexts we can summarise by “me, me, me! I’m so deep and clever!”? Such occasions often merely reinforce the popular perception of artistic outputs as being expressive of the creator’s emotions. But that is less interesting than artworks’ invitation to be social, communal, and at the same time to introspect and inspect our personal, perhaps emotional reactions to intrinsically neutral objects. Hence this neutral, utterly calm aesthetic object for your perusal now.

The hyperbole relevant to hyperboles 6 comes from David Hume’s A Treatise of Human Nature (1739):

“Where a passion is neither founded on false suppositions, nor chuses means insufficient for the end, the understanding can neither justify nor condemn it. ‘Tis not contrary to reason to prefer the destruction of the whole world to the scratching of my finger. ‘Tis not contrary to reason for me to chuse my total ruin, to prevent the least uneasiness of an Indian or person wholly unknown to me.”

hyperboles 6 was written expressly for Ensemble S201. Other works in my hyperboles series are, in order, for flute, violin, saxophone quartet, computer-controlled compressed air instrument orchestra, and cello. For more information see http://bit.ly/1Q2bgFr