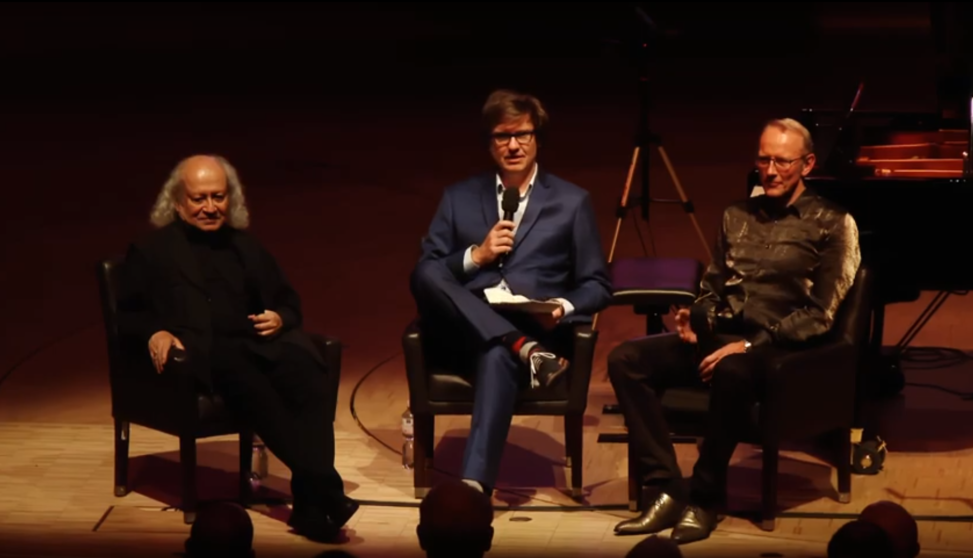 On October 29th 2019 I presented one of the most interesting concerts I’ve ever organised. Along with my colleagues at the NOW! Festival / Philharmonie Essen / Folkwang University, we placed four Yamaha Disklaviers and one Boesendorfer 280VC (a concert grand Disklavier with the same mechanics as the Yamahas) around the audience in the Alfried Krupp Saal of the Philharmonie Essen. The pieces we performed were almost all exclusively MIDI-driven computer affairs: Nancarrow Studies, using new arrangements for the ‘surround pianos’ by Clarence Barlow; a particularly stunning premiere that made true ‘room music’ in a way I’ve never experienced before by Ludger Bruemmer; several algorithmic pieces by Clarence Barlow; and one that wasn’t only performed by sequencer by Jean-Claude Risset.

The latter’s Duo for One Pianist was the only piece involving a human performer, pianist Susanne Achilles. Composed in 1989 with the help of Scott van Duyne, this used the music-programming environment Max when it was merely four years old; the Disklavier when it was only two years old; and MIDI itself when it was six years old. A true trailblazer then, it involved the live pianist playing on the keyboard as normal but the computer receiving the note along with other musical information and triggering reactive processes, sending these back to the piano to be played simultaneously with the pianist: transpositions, mirrors, delayed repetitions, pre-recorded sequences, etc. I remember seeing Jean-Claude perform these pieces himself during my first few days at Stanford back in 1991, and the experience has stayed with me. I’m informed by Andre Perrotta that Jean-Claude always performed with the same Apple computer from that time, so when it came to updating the software for modern machines and newer versions of Max—something that Andre did with the composer in 2012—there was quite a lot of work to be done. I’m indebted to Andre for sharing his versions with me in order to make this performance possible, as well as to my colleague Peter Domnick for arranging the loan of the 280VC with Boesendorfer.