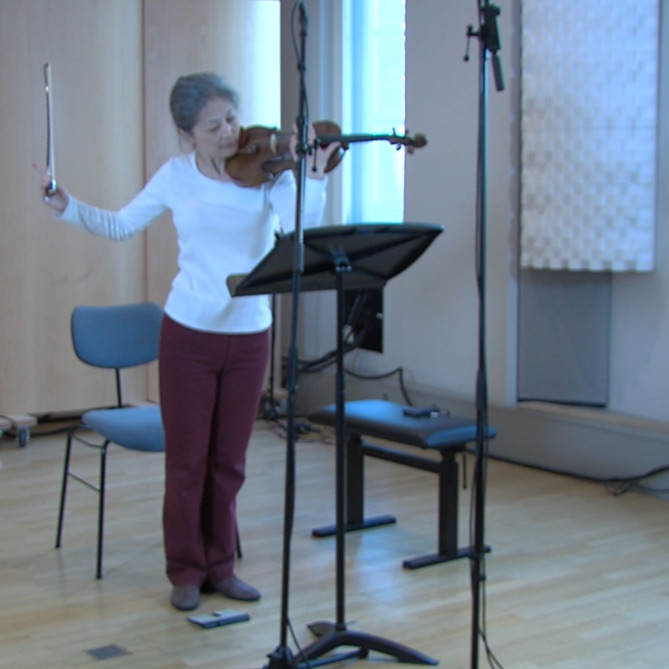 Premiere of Durchhaltevermögen in Münster

In May 2018 I was in Münster with edimpro colleagues Dimitris Papageorgiou and Karin Schistek to give improvisation workshops to students at the Hochschule für Musik. Mieko Kanno was with us to perform a lovely new work by Dimitris for electric violin and computer called deti. That work showcased Mieko’s research project ‘Modelling a Virtual Violin’ with the ‘Octet Violins’ software used to improve the sound of the electric violin. This software used impulse responses from violins in the Reid Museum at the University of Edinburgh. It was developed by the ever brilliant Alex Harker and was by far the best electric violin sound I’ve ever heard. You can hear the results of that research in the concert where she premiered deti in Helsinki:

Back to Münster though: apart from the workshops, Mieko gave the premiere of my Durchhaltevermögen on May 13th (2018). I blogged about this obliquely a while back. We went into the studio the next day to record. At the end of a typical section-by-section recording session, Mieko did a full performance to camera. It was the best and fastest performance thus far. You can see it below but before hand it’s worth reading the programme note, to get a handle on the provenance of the piece:

durchhaltevermögen was written for Mieko Kanno over about six months beginning late 2016. It is dedicated to the composer, violinist, and improvisor Malcolm Goldstein. Mieko and I share an enormous respect and admiration for Mr. Goldstein’s music and his impact on contemporary violin playing. Speaking personally, his improvisations both in live and recorded form have offered me some of the most profound and moving experiences not just of late but of my whole life. I’m very grateful for his music.

But how strange to write a highly detailed composition and dedicate it to a master improvisor. Was I transcribing an improvisation and calling it my own? (Certainly not.) Was I trying to “capture the spirit” of an improvisation? (No. Not really.) Was I trying to capture anything? (No. Release something rather than capture it.) So what’s the connection? (The spirit (I hope) and some of the playing techniques.)

The title can be translated from the German as stamina, staying power, or power of endurance. More appealing is the clumsy-literal translation of this compound noun’s three units: through-holding-power:

Power not in the sense of raw muscle or power over others, but power as in poise, mastery, the power of technical accomplishment, the power of multivalent interpretation; to be able to hold and present seemingly opposing states or views of an object, as in the Catuskoti paradox. (Take for example the question “Is this piece an improvisation?” Catuskoti insists that there are four, not two, possible answers: true, false, true and false, or neither true nor false, with the latter two being surely the most interesting responses.)

durchhaltevermögen was generated with the jitterbug algorithm I developed using my slippery chicken algorithmic composition software. After much tweaking this created a raw form of rhythms and pitches upon which a detailed reading was superimposed (an interpretation, a composer’s cut, you might say). Next of course comes the violinist’s reading. Then the listener’s. (Did I really compose this piece? True? False? True and False? …)