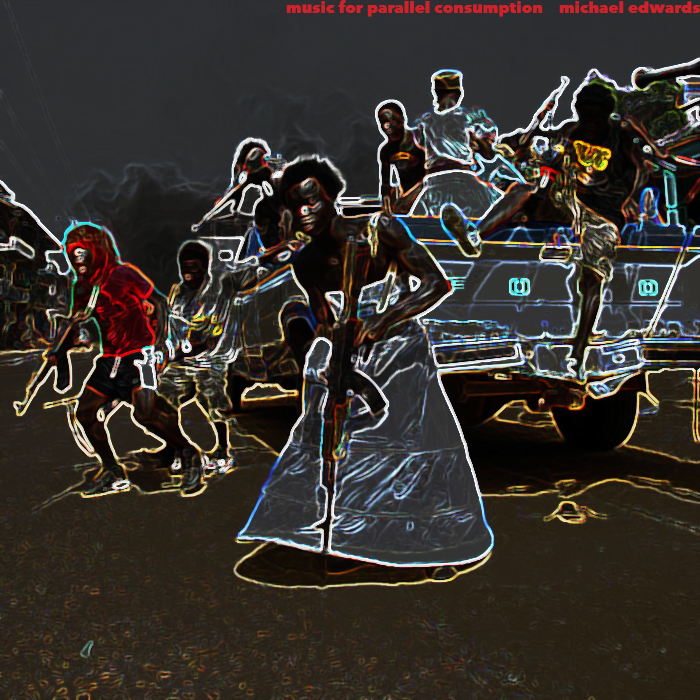 Composed in 2010 but not released until some final polish was applied in 2015, Music for Parallel Consumption is a 4-channel digital composition made for delivery and playback via a custom computer app. The title refers only partially ironically to the tendency to consume music as part of a backdrop to our otherwise-engaged lives. At the same time as offering an alternative to this mode of consumption (((the details, the details!))) the very nature of the piece’s construction and delivery strategy invites similar disregard. Not intended for concert performance, the app format almost encourages you to set and forget: choose your output mode, set the level, hit play, and let it run for as long as you like. Such contradictions are further inherent in the the polarisation of the meditative nature of much of the music against the album artwork—war being the ultimate consumptive impulse.

Just before New Year I released a new piece of computer piece in the form of an app made for Apple computers. I blogged on this in detail a while back, whilst the project was being finalised. In the meantime I’ve improved the interface and added some optional dynamics processing for listening in suboptimal environments.

The piece is available to preview and order on the bandcamp page from my publisher, sumtone. Anyone who buys the download gets a free link to the app.

The potential for delivering music via app is enormous. Apps allow musical ideas to be encapsulated in code and delivered directly to the public without needing to be fixed, realised, or limited in any way.

This flexibility is extremely attractive not only to the algorithmic composer like myself but anyone who has been frustrated by, for example, surround formats’ variety of channel ordering, bitrate limits on optical discs, or even what should be a simple task of making gapless album tracks work in web releases. We can use the app format to take care of and document all these aspects and more. Or, as in my release here, we can go much further by having the software be part of the creation of a piece which is consistent and coherent but different on each listening.

This is the first in what I plan to be a series of such pieces/apps. Its delivery format is certainly imperfect right now as it’s not an app for phones or tablets (which is what most people think apps are for), and it doesn’t even yet run on Windows machines—it’s just a Macintosh app at the moment. In the future I’ll be doing a little experimentation with apps coded to run on a variety of platforms, including iOS and Android.

In the meantime though, many thanks to various friends, colleagues, and students who gave initial feedback on the interface and experience of the app—in particular Matt Collings, Robert van Heumann, Cameron MacNair, Martin Parker, Dan Ross, Matthias Röder, Lauren Hayes, Tobias Kunze, and many more who helped improve the user experience significantly.